The computers arrived in Douala (the port city and economic capital of Cameroon) in mid-December after one long month of shipping. Once they arrived, the port held them asking for more money even though we had letters from the head of Peace Corps Cameroon, the US Ambassador and other “big people” asking for exoneration. We unhappily paid and transported the computers to the University in Tombel, a village outside of Douala. I arrived in Tombel to pick up my portion of the computer shipment (50 machines!) early January. Once I arrived a friend of the university organized a travel bus to transport my computers from Tombel to Bandenkop. This turned out to be the worst day of my life.

Just out of Tombel the driver filled the empty seats with one too many passengers even though I had paid for the whole bus. Also, the driver didn’t have his license on him so when the police stopped him at the first stop out of Tombel so we waited over an hour and a half for the driver to try and talk the gendarme into letting us pass with only a bribe. He was refusing for so long, because allegedly this same driver had driven through this stop before fleeing the police. We were finally allowed to leave after the driver bribed him with 20,000cfa ($40) when the typical bribe to pass is 500-1000cfa.

We continued on and dropped off the other passengers before turning off the paved road to head to my village. The sun was starting to go down, and I was beginning to get very nervous. When we entered my village I took a big sigh of relief, it was dark, the computers had been bumping around for an hour on the dirt roads, and I had been alone with the terrible driver guy. I was waving to all my friends in the center of town as we passed. We took the small road that leads to my house. We were just minutes away when the tire blew on a rock. The driver started cussing in his village language and french. I was so tired, dirty and frustrated. He hadn’t traveled with a spare. I couldn’t believe it. I ran back to the center and found my friend with a car asking if he knew where we could find a spare tire, but it was already pitch black night.

My friend ended up taking another teacher and me in his car. We pulled up to the broken down bus, and my friends started to yell at the driver about how irresponsible he was. I was so happy to have back-up. We loaded as much as we could into his suv and dropped it off minutes down the road at my house. We finished it all in 2 loads and I thanked them with beer money. I carried each computer into my house and set all 50 up like my house was a giant cyber cafe. In the morning I began matching up cables, mice and keyboards, and while I was working there was a knock on the door. The driver was there, he said he had slept in the bus and woke up early to find the new tire. He was headed to Bafoussam and just wanted to say goodbye.

I invited the 3 other ICT volunteers in the West region over with promises of cooking chicken and blueberry muffins if they would come over and help me re-install the OS on some laptops and turn on and troobleshoot all 20 of the desktops. We worked all day and next morning and had an MLK day feast in between. I couldn’t have been more grateful for my friends here.

Distribution day was a few days later. Power had been out for one week so I couldn’t get pictures like I’d wanted. (SORRY!) But I’ve begun taking pictures of the computers in their new homes. Here are just a few: a teacher at my school, the school treasurer, and the kids (my students) playing with MS Paint on the computer bought by one of my adult class students.

Thanks again so much for your donations and support. I will post up more pictures as they come. 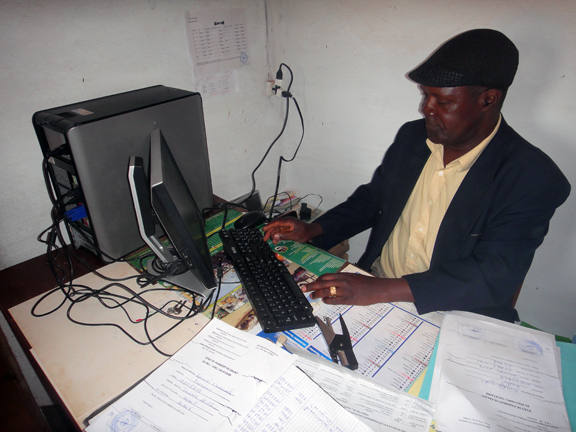 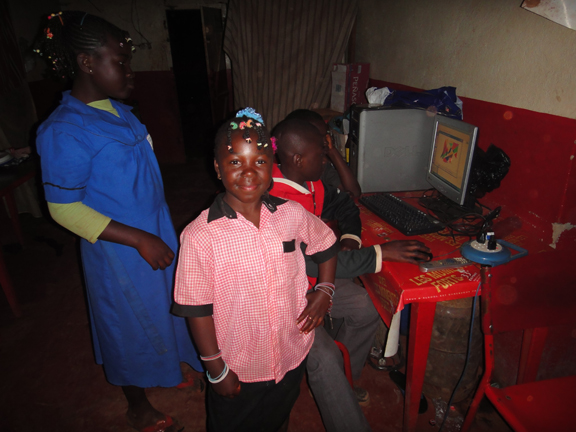