This past week a carpenter came to the house with the owner who lives in Yaoundé to put shutters and glass in the windows. This is a great thing and I’m no longer freezing to the bone at night, but there was something to sleeping in the “open air”. Just before the sun would completely disappear, i could hear the little squeaks of bats flying by—finally leaving their comfy spots in the trees outside of my house. The squeaks build just until it gets completely black and they’ve all left for hunting.

In the morning I would wake up to sounds of little birds playing in the trees, big birds landing on my thin tin roof, and annoying roosters waking up the village. Every now and then Eric, the guardian of the house, would chop wood, and Rocky, the always-tied-up guard dog, would cry for attention or breakfast. Now that the windows are closed up, i am more aware of the sounds in my own house. Moths that fly against walls and make tapping sounds, though my least favorite is when they trap themselves in plastic bags which give a sound of a louder animal than what they really are. Now in the rainy season, i can hear when the wind pushes hard just before giving way to rain. The tin roof expands above my head and creaks as it lowers back down, then little taps begin followed by the juiciest rain drops slamming on the tin and causing me to turn off any movie or music that was playing and open a book.

The other sounds of village life are more man made. Moto’s can be heard from a mile away with their revving engines and family of passengers holding on tight. Cars make a different sound as they avoid the cracks of the dirt road and bounce around the huge crevaces left behind when the rains take away the dirt in little rivers. Every now and then music will be blasting from one of the boutiques or Ma Josienne’s restaurant, but usually this is on special occasions. Village life is rather quiet. During the school year, a traditional dance group practices every wednesday with the wooden xylophones that you can hear from across the village. 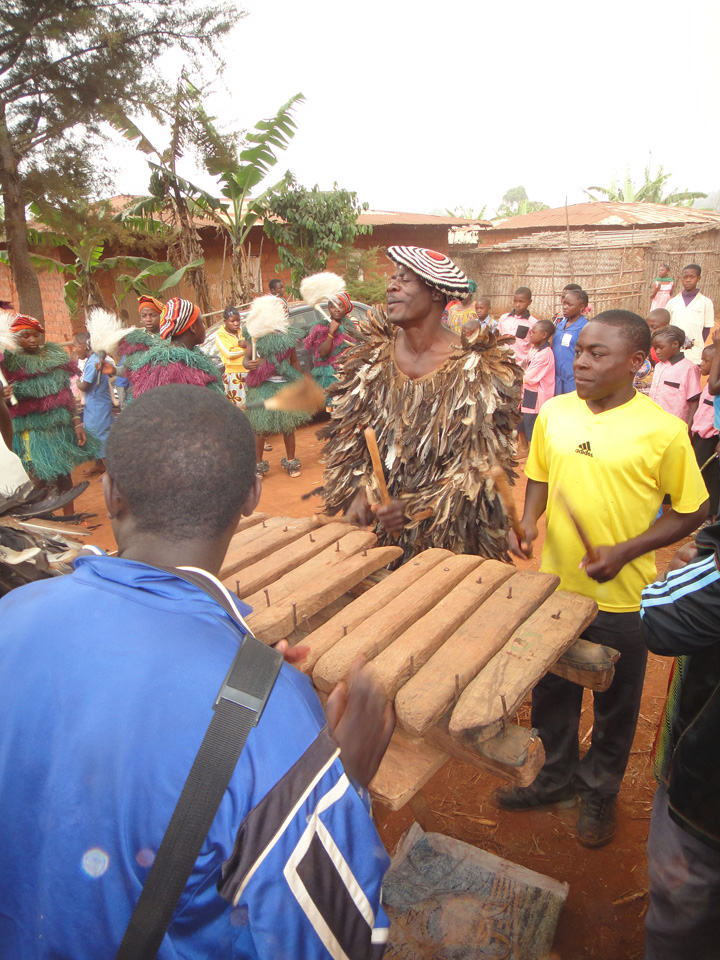 In the cities, the day starts early with the hustle and bustle of taxis and zooming motos honking, trying to take their fair-share of the road. Honking is its own language here. A honk can mean many things. When a taxi rolls up to someone standing on the side of the road he honks to say “Hey! I’ve got open spots in the back! You in?” then the person tells him his/her destination. If this fits into the taxi man’s predetermined route, he honks “OK”. If not he just drives off. If yes the client yells his price and the taxi man honks in accordance or again, just drives off. A honk means you’re passing someone on the left, it also means “Hey Idiot! You’re going too slow!”. For passing taxi’s it often means “Hello”, and for cars who take the mountains to villages like mine, honking means “Hey, I’m a taxi and I’m coming around this here corner.”

People on the sides of the road are shuffling off to school or work, or selling things like bananas, french bread with an assortment of things to stuff inside it for breakfast. The mama’s kiss, hiss and snap to get your attention. Music begins blaring at 7 if you’re lucky, but if it’s a church day its earlier and lasts all day. Friends pass each other and shake hands with a snap at the end. It’s like a secret handshake in the States, but here it’s expected and extremely hard to perfect.

When people are annoyed here, they make a sound like clicking in their mouth while they shake their head, or just look away annoyed. When people clear their throats they don’t hawk loogies like americans, they do the opposite of swallowing air. With their mouths closed they pull whatever in the back of their throat out with making a equally gross guttural sound like hawking. When mama’s are surprised or happy, they yell a sing songy “hey hey HEY heyyy” or just the short “HEY heyyyy”. At night the mama’s chat while the charcoal grills are crackling with fish, prunes and plantains, while at home the fire crackles with the three stone wood fires boiling sauces and rice.

For as nice as the quiet is here, cameroonians are noiseaholics. The music blasts until speakers and ear drums are broken. Yelling is the normal volume for conversation. Radios, music and televisions play usually without people’s full attention. Bars one after another have their own speakers with their own music playing at the same time, and too loud for conversation. Promotional vans drive by yelling with megaphones or speakers strapped to the top about phone plan deals or lottery chances. Cities are full of noise. I prefer my village life. It’s also rare that I walk around or travel with my ipod, because I like to pick up on the sounds, or bask in the few moments of silence.