In lieu of our country’s independence, here are some thoughts on freedom:

The really important kind of freedom involves attention and awareness and discipline, and being able truly to care about other people and to sacrifice for them over and over in myriad petty, unsexy ways every day. That is real freedom. That is being educated, and understanding how to think. The alternative is unconsciousness, the default setting, the rat race, the constant gnawing sense of having had, and lost, some infinite thing.
-david foster wallace

-I take the only desire one can really permit oneself. Freedom, Alvah, freedom.
-You call that freedom?
-To ask nothing. To expect nothing. To depend on nothing.
-What if you found something you wanted?
-I won’t find it. I won’t choose to see it. It would be part of that lovely world of yours. I’d have to share it with all the rest of you—and I wouldn’t.
The Fountainhead by Ayn Rand

The DFW quote is my favorite quote that I saved on my computer and open up to read every now and again, and is the contrary to the other. For a depressed guy he was truly inspiring. I’m reading the Fountainhead right now, and I’m really loving it. Its written according to the philosophy of Objectivism by Ayn Rand that says many things, but one of which is that the pursuit of one’s own happiness is the “proper moral purpose of one’s life.”

My philosophy, in essence, is the concept of man as a heroic being, with his own happiness as the moral purpose of his life, with productive achievement as his noblest activity, and reason as his only absolute.
—Ayn Rand, Atlas Shrugged

I don’t know if I believe this philosophy, but the book is extremely interesting, and is on the subject of architecture and design with one character designing buildings at their simplest forms and logical layouts, while the popular architect designs for the clients adding unnecessary adornments to facades and layouts to provoke discussion with no real use. It’s great so far and I roped my architect friend and old roommate into reading it with me.

I’ve been reading a lot lately, because I’ve been in village trying to conserve on my internet hours, as well as the fact that this July I gave myself a crazy schedule. Each Tuesday and Thursday I’m giving adult computer classes to people who have never touched a computer. Each Wednesday I’m teaching anyone who wants to come to my house starting with how to make tofu, block soap and powdered soap, paper &fabric beads, Batik (fabric dying with wax), and then Matt is coming for the last week to give an Intro to Business class. So far a lot of interest, and yesterday I accidentally worked on my computer for HOURS making a computer game on Flash so the adults can practice clicking and stuff. It felt good to be working on design projects again.

I also talked a woman in Yaoundé into giving a small class of fabric dying so I can better teach it in my village. She makes beautiful fabric and I bought way too much the last time I came to town. She’s a wonderful lady, named Charlotte and we had a good time dying our own fabric which are now skirts. Enjoy the pics! 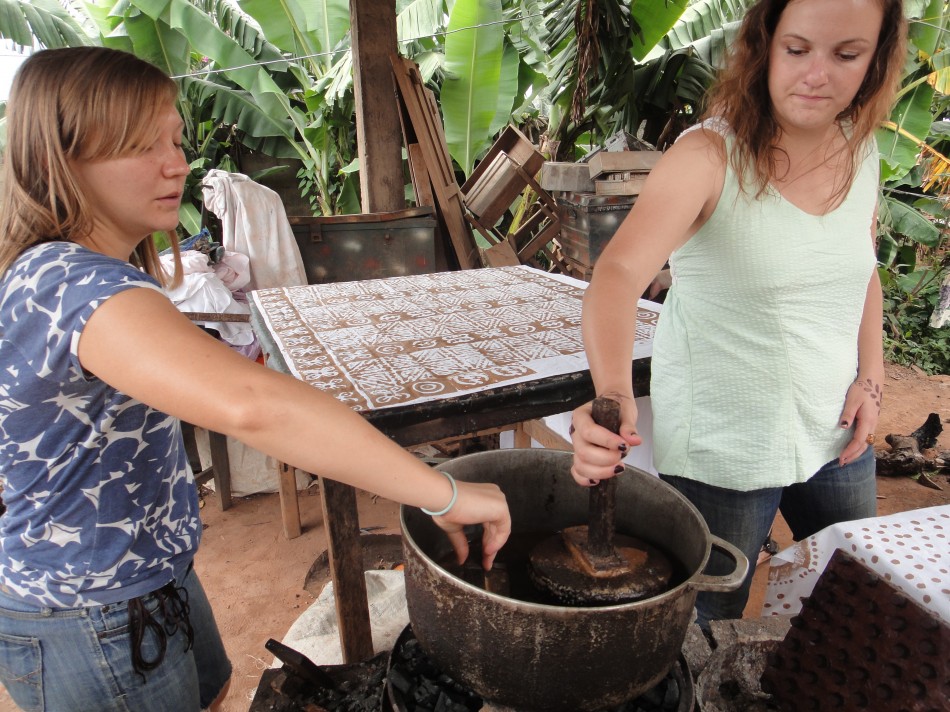 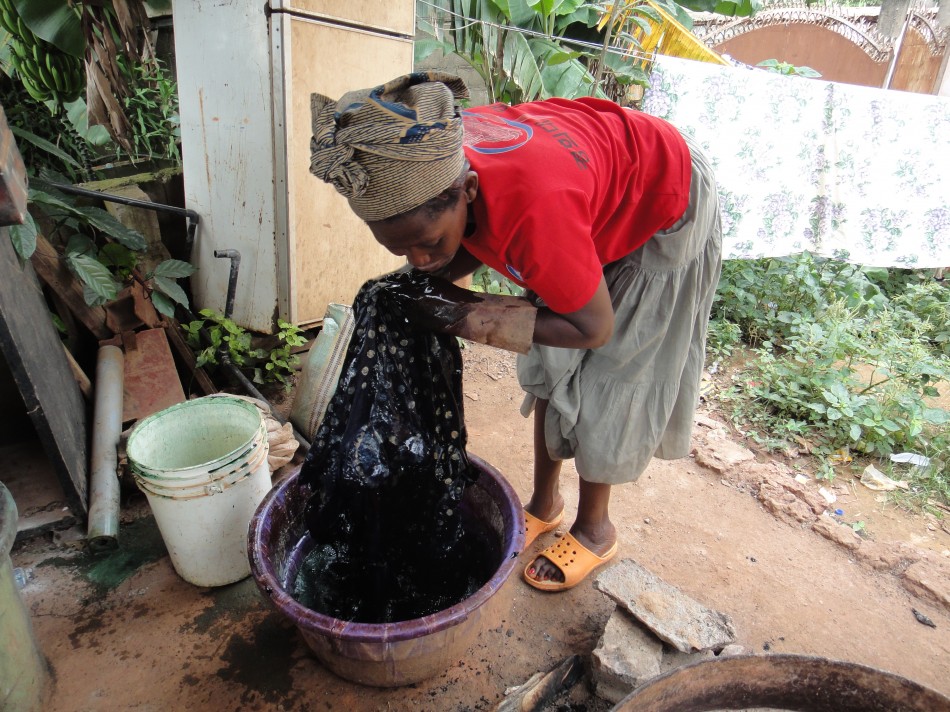 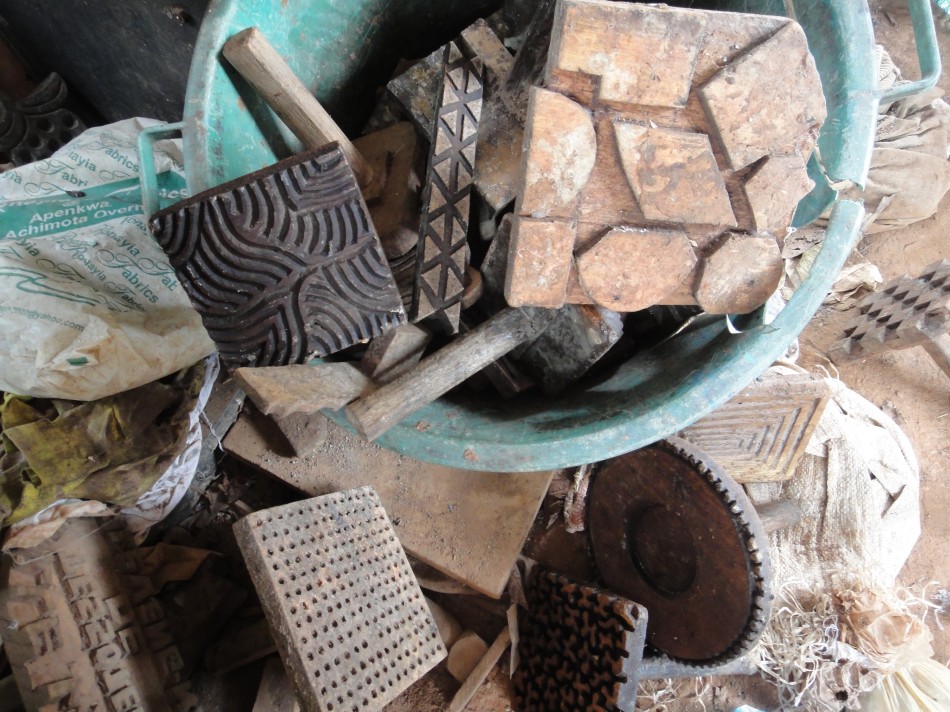 Also, I recently got my first weave put in. Let me say, it really takes a village. I think everyone got to do at least one braid. Not really, but as people passed they would stop and talk or stop and braid a few and then continue on shouting “Du courage!” as they left. Some people laughed, and some people told me I looked more than beautiful. My main braiders were Mama Marie and Fanou, the 7 year old sister of Ingrid and daughter of Honorine. They laughed when I maid faces from pain and continued on until 3 packages of fake hair were tied onto my scalp. It turned out nice for a weave on a white girl, and I plan on leaving it in for 2 months and never doing it again. It’s 4 days later and my head still hurts.

Lastly, I got the best surprise in the mail the other day. The post office here is a joke, and I’d been trying to get my mail for weeks. The guy with the key is always out, or they’ve closed early or opened late in the day on purpose so I can’t get my mail. Finally I went a few days ago for my long awaited package, and they gave it to me! I was hoping it was the package of art for my students from the Art Exchange that I had them participate in, but when she opened the door and I saw it wasn’t an envelope, I knew my package had gotten lost in the mail like I’d thought and was disheartened. I took the package and tilted it up so the mouse holes didn’t drop anything out of them. I looked at the name and didn’t recognize it, and went straight to the office to open it.

I cut open the box and saw a letter on top of a pile of wonderful things. The letter was written by a women who follows my adventures in Africa through this blog, and had included some gifts for my students and myself. I immediately used my new burt’s bees, ate my chocolate, went home and lit my new candle. I knew I needed to update my blog since it’s been over a month and THANK this Kansas mama! Life in Cameroon gets to be life in Kansas really quick. I began with a lot of energy and inspiration, and slowly lost adrenaline and reverted to my normal ways in America. Bandenkop has become my new “small town” with it’s small town life and small town conversations, garden growing, from-scratch cooking, and chickens running around. The only difference is that I’m speaking french or patois, and rocking chairs don’t exist. It’s a shame. It’s nice and necessary to get inspiration from people, and it was just what I needed to get my head back into the swing of things. I only have a year left and I have ideas I haven’t even started on!

I also love any opportunity to hear from people back home. My good friend here who teaches at the primary school grows sunflowers in her garden. I have no idea where she got the seeds but they make me so happy to see them. Keep those Kansas reminders coming. I miss you friends and family, and I’ll be coming home soon enough. Don’t forget me. 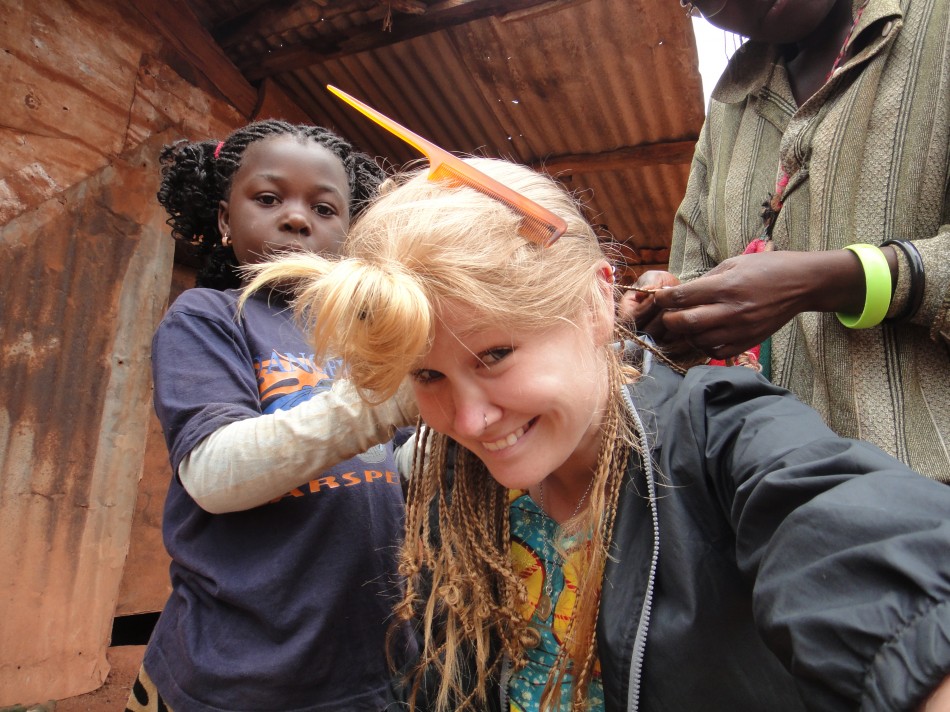 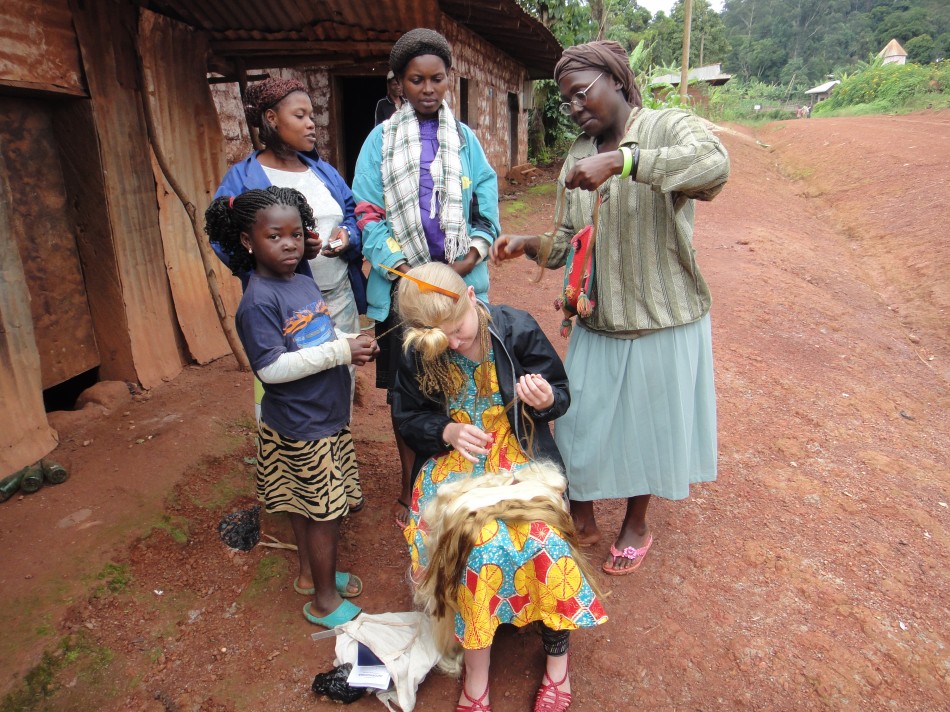