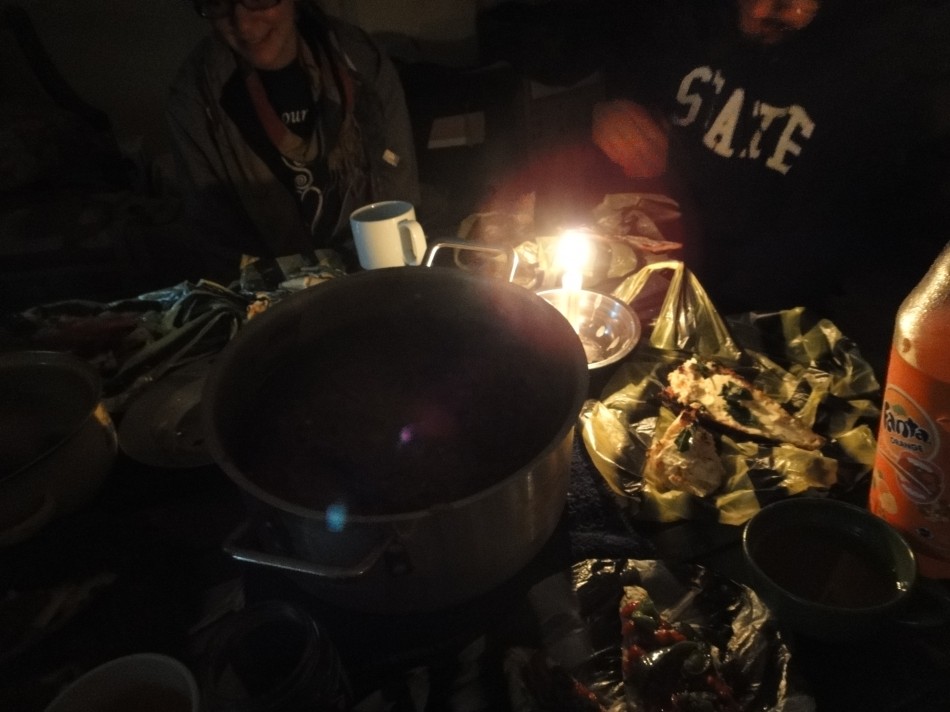 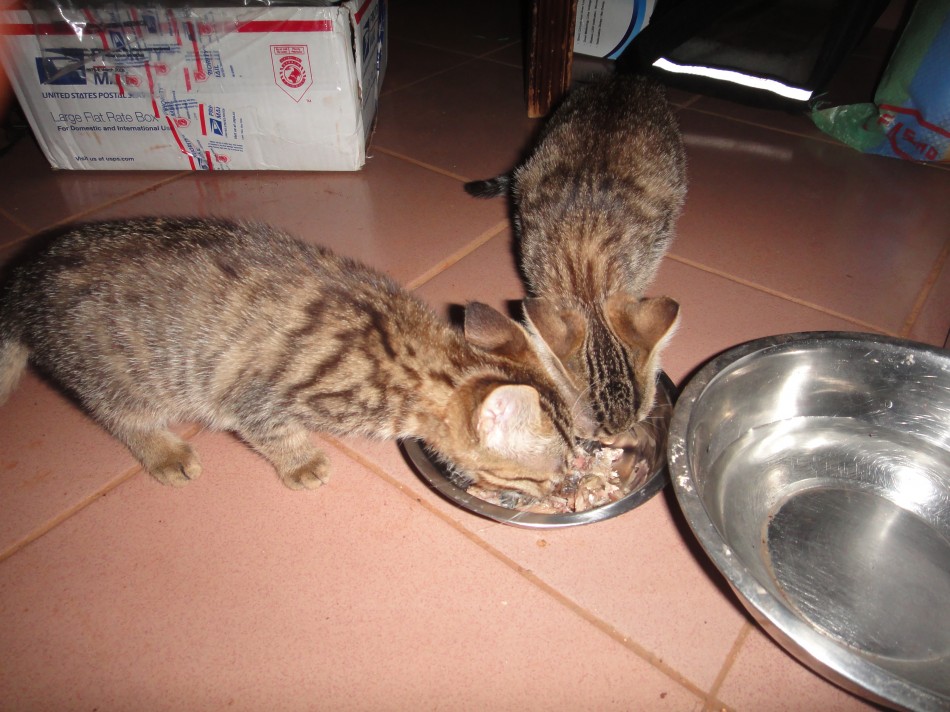 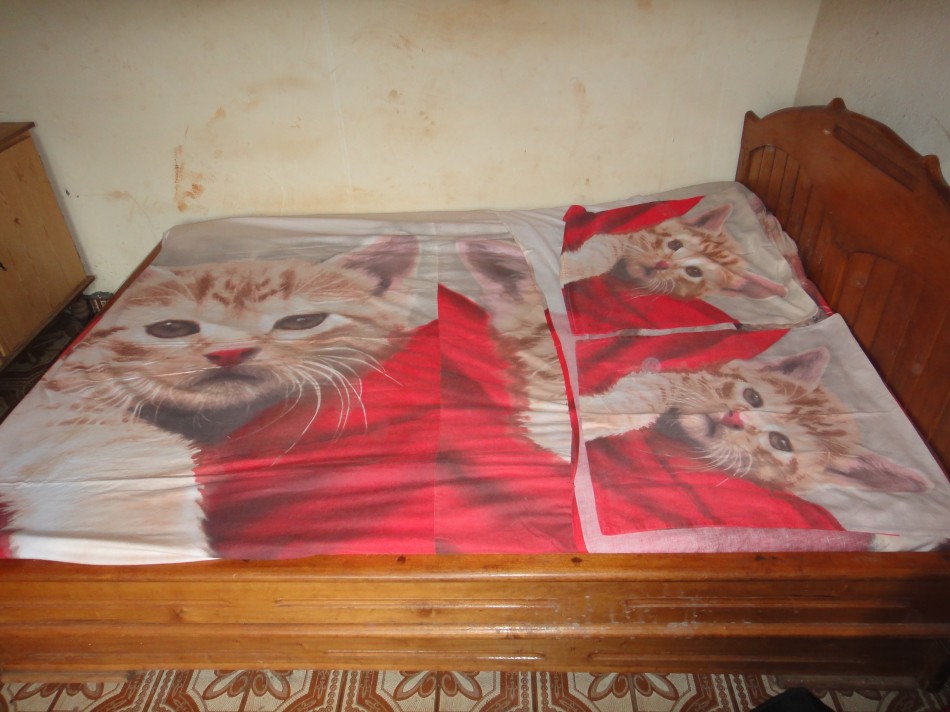 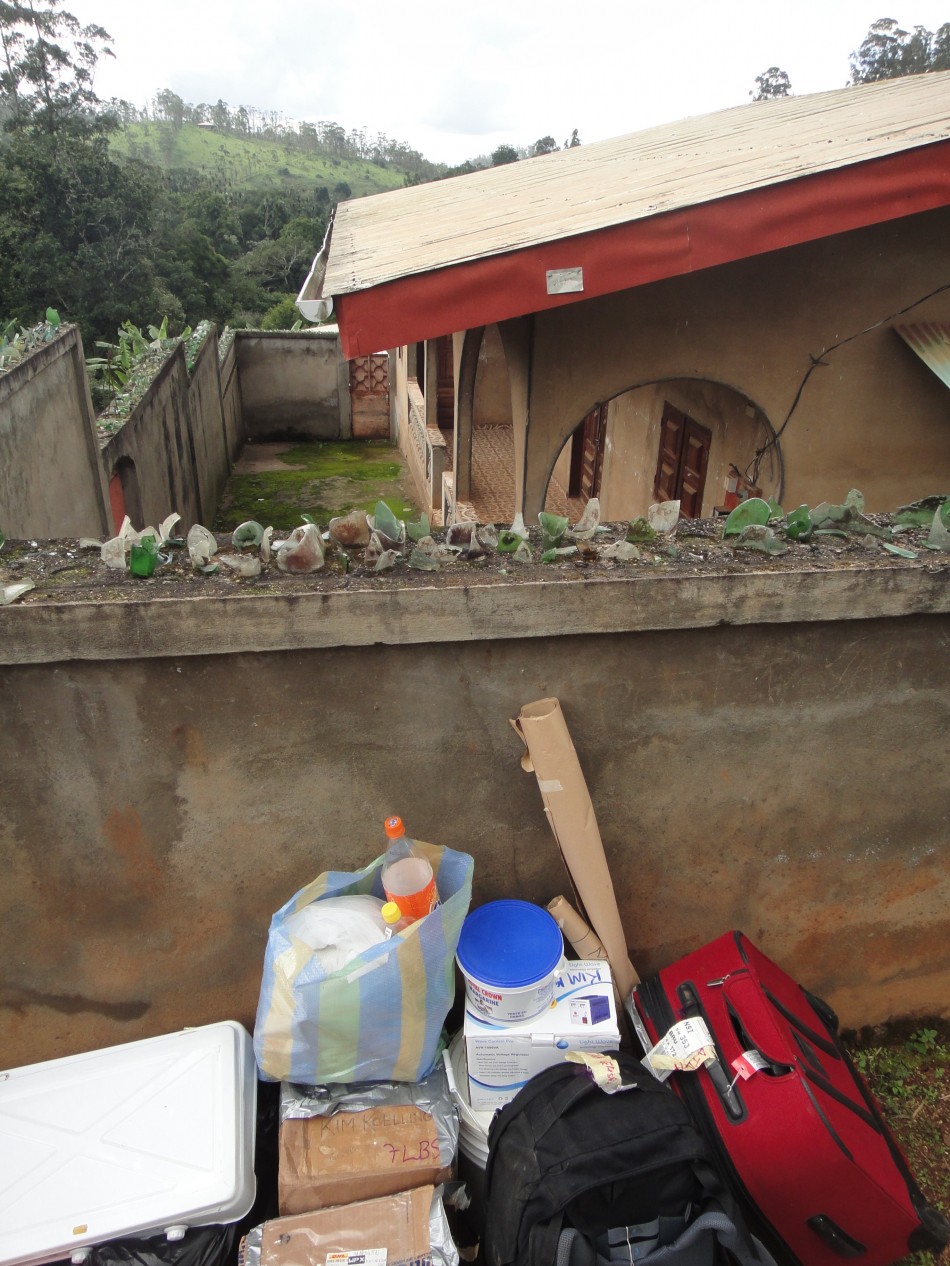 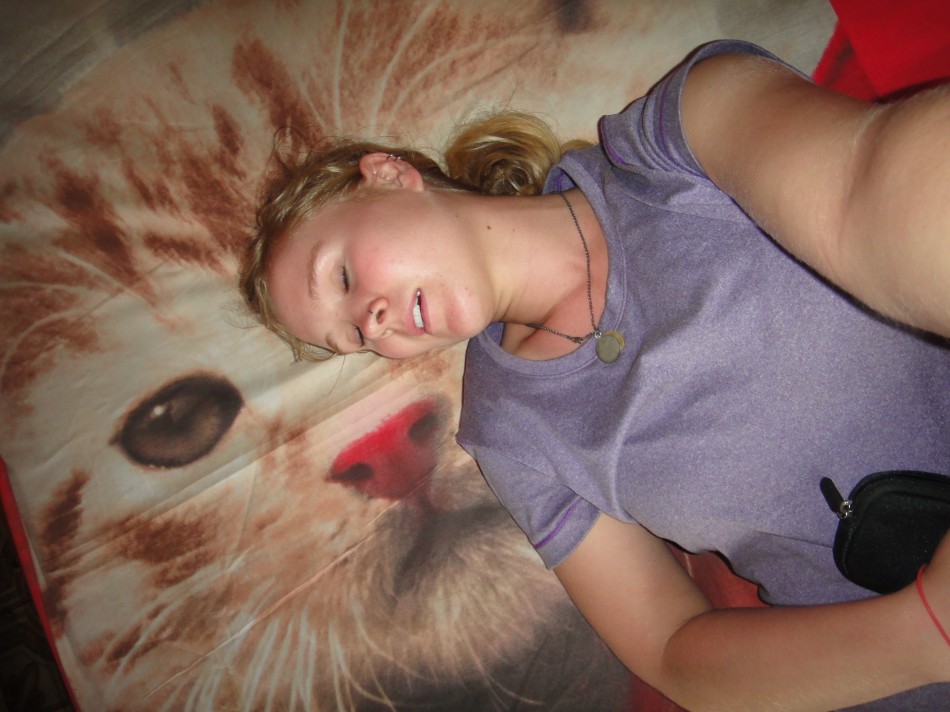 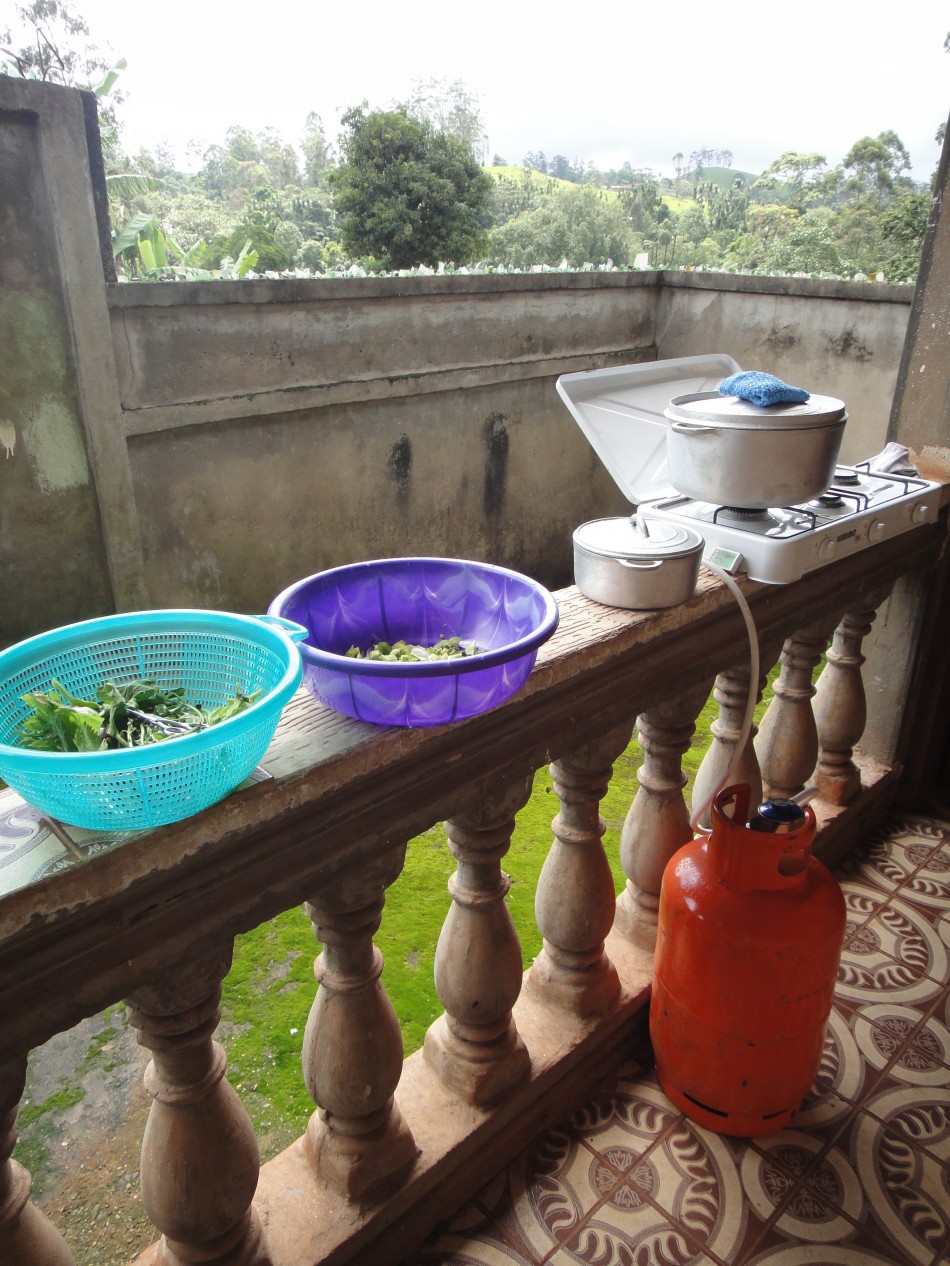 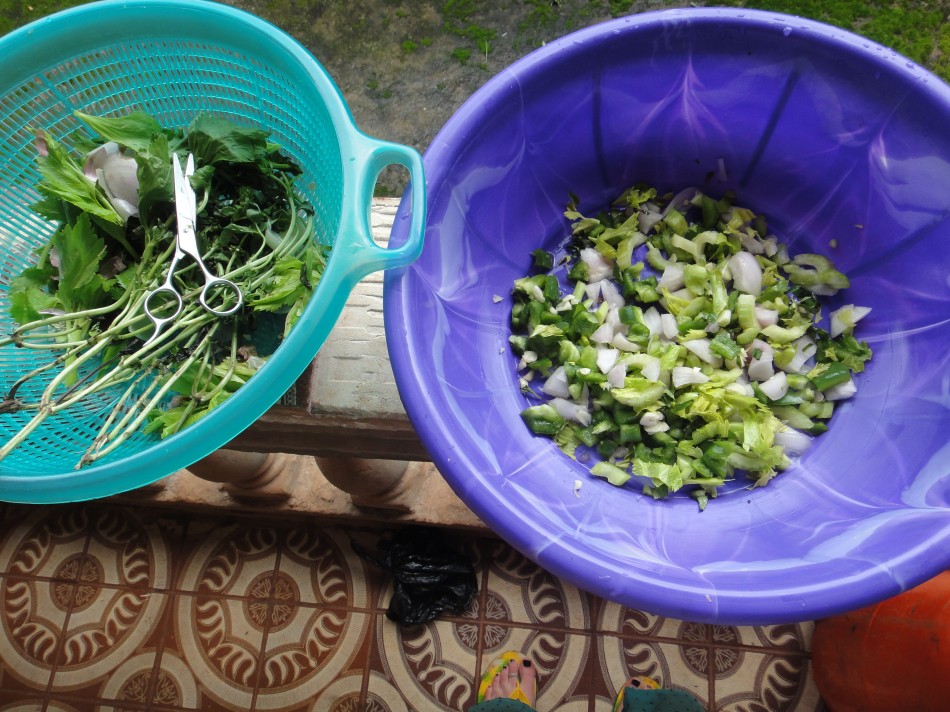 i took my first hot bucket bath hours ago and my hair is still not dry. It rains here everyday. Sometimes the misty kind of rain that just lingers making the air seem wet and never making a sound. Other times it starts slow with little drops i can hear tapping on the tin roofs and palm fronds. And I have just enough time to take my laundry off the line before it starts falling in heavy sheets, forming little red rivers rolling past my house back down the mountain to Bafoussam.

Today I had to walk an hour in the misty rain to the village over, Bapa, where another volunteer lives. She left for Yaoundé and asked me to look after her cat. Her name is Charmayne. The cat’s is Cardamom. It wasn’t as bad as I was expecting. I passed lost of people, raising both my hands—as is custom—and said bonjour to the mamas, old men with canes and children carrying baskets on their heads. The children typically giggle when I speak. And when I ask directions or start conversation, they generally just watch me talk with mouths ajar and mumble a response or sometimes nothing at all and then giggle. The roads were slick from the rain, which is why I didn’t take a moto. The roads around Bandenkop are dangerous and eroded to miniature grand canyons. The fog was thick at the tops of the tall trees and off in the distant mountains. I walked past my favorite patch of cabbages, all sprinkled with droplets of rain water and glittering under the overcast sky.

I arrived to find the door to Charmayne’s compound locked and spent a good five minuted banging loudly on the metal door until finally two kids appeared—and in no hurry—to let me in. My knuckles were genuinely sore. I found Cardamom sitting on the couch and gave him a scratch on the head and put some water on to boil. I fixed some vanilla chai tea i found in a baggie (she told me i could!) and i hung out with the cat for an hour before walking the hour back to Bandenkop.

Tomorrow I leave for Bamenda in the northwest to celebrate my birthday! There is a restaurant there that makes pizza and a cafe with lattes and cappuccinos. There’s also a few “whiteman” stores which sells things like pringles, candy bars and american deodorant, etc. I can’t wait! There’s actually a lot of volunteers coming in for it from far and wide (5 different regions to be exact), but we’ll see who all shows up. My parents sent me a red velvet cake mix, icing, candles, sprinkles, a happy birthday sign with the metallic cut-out letters and glo-stick bracelets. All the ingredients for an epic Bamenda Birthday Bash!